Guest writer, posted by Mtndjd
This post is purely Satirical and not intended to offend fans of Spandex. Its still ok for women. 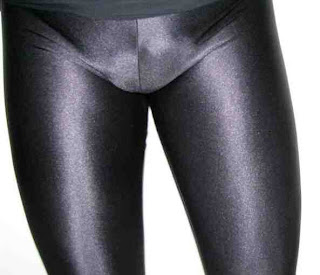 If no one else is going to speak out, then the MudBlog is here to set some things straight;

There seems to be a grey area when it comes to the appropriateness of biking attire. Somewhere in our rough, gun slinging, cowboy, western cultural history; an embarrassing rift has occurred. The rift is sometimes as jolting and horrifying as scenes from a bad European beach movie where male stars run around in speedos, thongs, and G-strings (aka. marble bags). A naive observer might be inclined to ask, 'whats in your pocket?' the obvious problem being, there is no pocket. John Wayne will continue to turn in his grave until men in Spandex are outlawed in public. 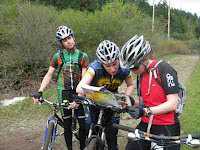 The fashion trends among bikers have undoubtedly become commonplace due to road riding heroes such as Lance Armstrong, and Greg LeMond. These guys did it for the money, not because they liked publicly exhibiting their packs. Repetitious motion to the extent experienced during the Tour De France and the likes, gives some credence to the uniform. Unfortunately for early mountain bikers, like a Canadian without a mullet, if you weren't sporting tight spandex and shaved legs, you just weren't a serious biker. Luckily, the times have changed....but unfortunately, confusion still exists. A shift to the more rugged, traditional American 'manly' style of attire has influenced mountain bikers of late. Durable 'baggie' shorts with crash padding and less revealing styling have brought the much needed coolness factor back to biking. The baggies incorporate spandex, or other non-chafing technologies, all without compromising the manliness factor. Since this change in styling has occurred mountain biking has exploded in America. One can only speculate that this is not a coincidence. Men everywhere are now proudly riding their bikes without having to leave their masculinity in the garage. We would love to get some comments from all of you out there that still wear spandex in public.
1. How often do you wear Spandex in public?
2. Do you ever wear Spandex when not biking?
3. Do you ever notice people staring at you/yours when in public?
4. If you are a man, do you shave your legs?
5. Would you be comfortable wearing a speedo on the beach in America?
6. Do you realize that 'show-through' is accentuated when viewed from the side?

wow. that's the best laugh i've had in some time. thanks for that!

'bout time someone spoke up about this. Without question, I don't miss my spandex!!

A bunch of guys showing up for up an after ride beer at the local brew house in spandex just makes me slightly uncomfortable.

Now if I were ever to road bike again I would have a dilemma on my hands.

I cannot believe that this subject could ever be raised!
In the so called world of freedom of speech and choice surely its up to the individual to have that freedom of choice without being overly criticised for what they wear!
I do suggest that people read the read the book "Sissy Nation" by John Strausbuagh before making any further comment.
BTW I had the best laugh about any one subject in a long time!!

1. I almost always wear spandex in public
2. I wear spandex when not riding when getting food after rides, or if I run errands after rides. I also wear spandex when not riding sometimes just for fun.
3. I always notice the ladies staring at me
4. I shave my legs on the second full moon of every third odd year.
5. The only swimsuits I own are speedos and I live in america. In fact, I go to water parks in speedos too. Yet, for some reason, people always think I have grapes with me and have asked me for some on numerous occasions.
6. I didn't know that.